TerraCycle and Febreze were delighted to announce a new collection contest for the Air and Home Care Recycling Programme – The Febreze Freshness Rewards Contest in 2016. Both private collectors and public locations could participate in the contest, which had a total of £2,500 in prizes shared among the lucky winners.

In total, 40,315 pieces of air and home care waste were collected. TerraCycle and Febreze would like to thank all the collectors who participated for their amazing effort.

To take part in the The Febreze Freshness Rewards Contest collectors simply had to send in as many shipments of air and home care waste as possible between March 7th and July 8th 2016.

The top five private collectors and the top five public locations  won amazing prizes, which they donated to a charity of their choice.

All shipments over one kg were credited with a sweepstake ticket and two sweepstake winners were drawn at the end of the contest. The winners will be published on July 18th 2016.

The 12 winners shared a total of £2,500 in prizes, with two lucky sweepstake winners each receiving £125 in charity donations.

Let your community know that you are participating in the contest, by putting up the Febreze Freshness Rewards  poster next to your public location collection point. Every piece of air and home care waste counts! 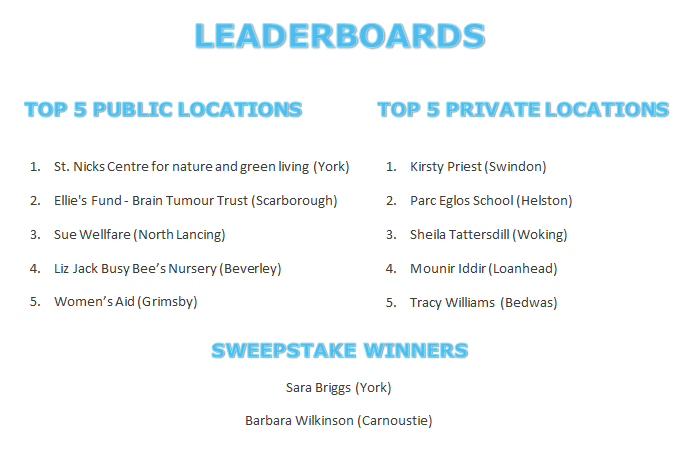 For more information about the contest please see the terms and conditions.